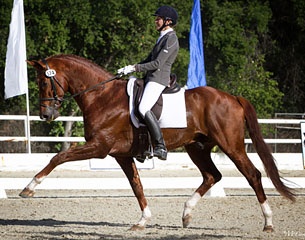 The United States will be represented by only one combination at the 2013 World Championships for Young Dressage Horses in Verden, Germany, on 7 - 11 August 2013. The high scorer in the qualifiers, Charlotte Jorst and Vitalis, have decided to jump the puddle and travel to Europe to attend this prestigious Young Horse event.

The Danish born Charlotte Jorst scored an all-time high average of 91.92 in the U.S. West Coast selection trial held at the 2013 CDI Flintridge in May. Vitalis is a Dutch warmblood stallion and reserve Westfalian Licensing champion. He is by Vivaldi out of Tolivia (by D-Day).

A group of five individuals have also been invited by the United States Equestrian Federation to participate in the inaugural tour of the World  Championships. The tour will be led and organized by USEF Young Horse Coach Scott Hassler and will include tickets to the young horse dressage events as well as meetings with European experts. The tour was open to anyone who has participated in the U.S. Young Horse Program as a rider, trainer, owner, or breeder. The 2013 participants will include: