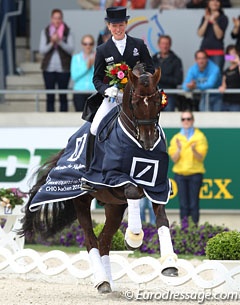 German Olympian Helen Langehanenberg put the icing on the cake when she won the 2013 CDIO Aachen Grand Prix Kur to Music in a sell-out stadium on Sunday morning 30 July 2013. The 31-year old completed a hattrick and became the queen of the show with triple 80% scoring tests. The Aachen CDIO Kur to Music was an interesting class with high class horses that performed at top level but with room for more.

Langehanenberg rode her new freestyle for which many spectators still need to acquire a taste with its spaghetti-line choreography. On a technical level the passage was elastic with super swing, the piaffes were rhythmical though Damon Hill (by Donnerhall x Rubinstein) could shift more weight to the hindquarters. The extended trots were superb. Despite the featherlight contact Helen has with the bit, the liver chestnut stallion should close the mouth instead of rolling around those bits like chewing gum. The extended walk and collected walk were lovely. The two tempi changes were hugh, but could have been a bit more collected in the frame. Langehanenberg scored 85.300% to be a league of her own.

"He was really fresh, every day a little fresher. Before the kur he bucked in the warm up," said Langehanenberg. "He was really perfect." 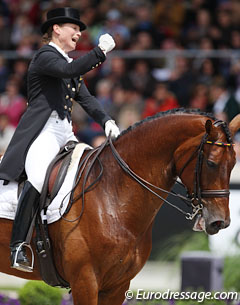 While the top eight in the Kur were all fabulous rides, this year it was hard to predict a ranking and some riders could easily have swapped places without anyone being offended by it. Isabell Werth's second place in the kur with 82.075% was generous. Riding to dramatic, but unidentified film music, Werth had her Don Johnson  (by Don Frederico x Warkant) on best form on Sunday. She rode well to the cues of the music even though this freestyle in her large collection of kurs does not stick to your ears. While her Hanoverian gelding was focused on the rider and attentive to her aids, he did not always give a truly happy expression with his mouth regularly gaping (especially in the half passes and final trot extension). Werth's kur has an admirable high degree of technical difficulty, which certainly earned her extra credit. She rode lines such as extended trot - piaffe - extended trot, trot half passes followed by passage half passes, and a canter pirouette transitioning into a piaffe fan. The extended canter was powerful, the extended walk just ok. The pirouettes were small but there could have been more left in the forehand.

"I was really satisfied yesterday, he should have been like that on Thursday," Werth said about the improving form of her horse in Aachen. "I'm so happy and proud of Johnny. I'm happy happy." 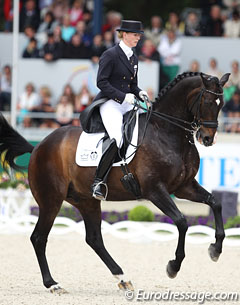 Danish Nathalie zu Sayn-Wittgenstein's 16-year old Digby (by Donnerhall x Sandro) seem to be like red wine, it gets better with age. While the trot has never been the horse's strong point, his piaffe and passage never falter. Digby continues to show incredible amounts of energy, bouyancy and swing in those two high-collection movements. Riding to Slings Music Cast tailor-made French music Zu Sayn-Wittgenstein rode a very secure freestyle with only a mistake in the one tempi changes to meddle with the score. The changes, however, were wonderfully ridden though. The duo ranked third with 80.900%

"I never expected to finish here third," said Zu Sayn-Wittgenstein. "He was so good on my leg this week. He's not showing any sign of age. The Danish princess was remarkably critical of the scores she got from Danish judge Leif Tornblad, who gave her the lowest scores though not too far out of line with his colleagues.  "We never get gifts from the Danish judge. They are constantly not helping us, so we have to get points from the others then." 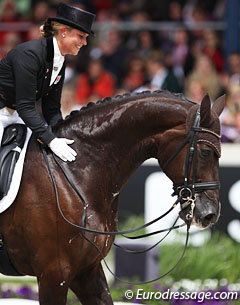 Three Danes ranked right behind a German duo at the top. Zu Sayn-Wittgenstein was third, Anna Kasprzak fourth and Andreas Helgstrand climbed to a fifth place in the freestyle. Kasprzak rode her Phil Collins freestyle and scored high marks for Donnperignon's strong points: the extensions, the well regulated passage and the clear tempi changes on curved lines with flawless transitions between the ones and two's. The collected walk was slightly tense though and on my occasions Donnperignon became too tight in the neck, especially in the piaffe and one tempi's. Anna scored 80.475%.

Andreas Helgstrand and the 11-year old Akeem Foldager shone with incredible piaffe-passage work in which the horse has limitless potential. The basic work, however, was quite flawed. The corners were poorly ridden and Akeem appeared rigid in the mouth, showing his tongue between his lips on the right side, while Helgstrand visibly half-halted the horse a lot. At the end of the test Andreas rode an impressive double piaffe pirouette and posted a score of 79.175%, which could have been higher if there hadn't been a mistake in the one tempi changes. 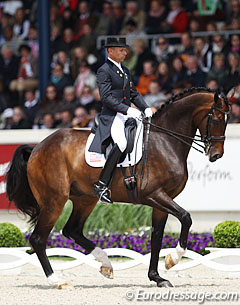 Steffen Peters and Akiko Yamazaki's Westfalian gelding Legolas (by Laomedon x Florestan) ranked sixth with 78.675%. Peters' music included Queen's Under Pressure and other tunes instrumentalized by the violin.  The piaffe and passage were well regulated without the horse becoming overzealous behind. The two tempi changes showed the nice amount of relaxation, a mistake occured in the ones. The right double pirouette was quite big, but the canter half passes were outstanding. Steffen upped his degree of technical difficulty by riding a double pirouette followed by a transition to piaffe. The end halt was not immobile.

Anabel Balkenhol and the Hanoverian gelding Dablino (by De Niro x Wanderbusch II) presented her new freestyle to an international audience for the first time. Her kur is based on music by Sasha with lots of harp, guitar and saxophone tunes. Dablino usually struggles to stay in place in the piaffe, but the steps he showed in the kur were the best of his weekend. Balkenhol rode beautiful lines with piaffe, trot half passes, and passage half passes. He did break into canter once. The two tempi changes on a curved line were wonderful. There was a mistake in one of the one tempi lines. Anabel finished seventh with 78.250%.

Eurodressage photographer Astrid Appels took photos of all combinations competing at the CDIO Aachen. Contact us if you are interested in prints of your photos!