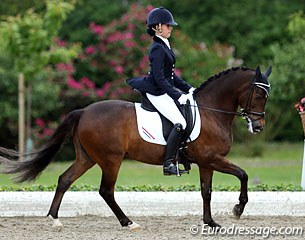 The Dutch Equestrian Federation and pony chef d'equipe and team trainer Tineke Bartels have announced the team that will represent The Netherlands at the 2013 European Pony Championships in Arezzo, Italy on 24 - 28 July 2013.

Bartels based her decision for the team on the performances of the riders in the 2013 KNHS FEI Pony Cup competitions as well as international shows this 2013 outdoor season.