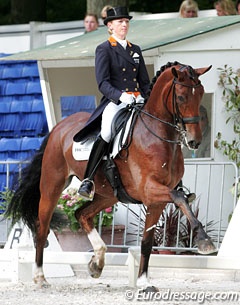 Marlies van Baalen's Grand Prix mare Phoebe has been retired from competition sport and will continue a career as brood mare. The 16-year old Dutch warmblood mare is in foal to Charmeur.

The 1997 born Phoebe is by Regazzoni out of Gianne (by Ulft x Homerus) and is bred by Ciska da Silva.  The bright bay mare was trained and competed to FEI level by Annemieke Vincourt-Krom from November 2002 till the summer of 2006. In November 2006 the mare sold to Dressage Stable van Baalen.

In the spring of 2007 Marlies made her small tour debut with Phoebe and moved her up to Grand Prix in November the same year. Between 2008 and 2011 Marlies and Phoebe competed at several national and international Grand Prix dressage competitions and were submitted to the Dutch B-team.