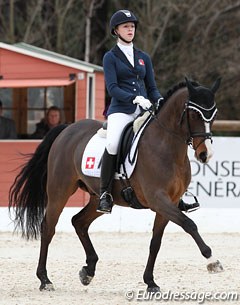 The dressage selection committee of the Swiss Equestrian Federation has announced the team that will represent Switzerland at the 2013 European Pony Championships in Arezzo, Italy, on 23 - 28 July 2013. Team trainer Heidi Bemelmans made her pick based on the performances achieved by her pony riders this 2013 show season.