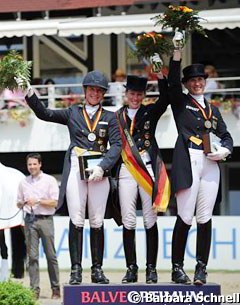 2013 World Cup winner Helen Langehanenberg played first violin at the 2013 German Dressage Championships in Balve, Germany, on 7 - 9 June 2013. Aboard Christian Becks' Westfalian stallion Damon Hill (by Donnerhall x Rubinstein) she won the gold medal in the Special and Kur and was a league of her own. While the star of Langehanenberg shone brightly this year's German championships were not a major highlight.

With two A-team riders absent from Balve - Olympians Kristina Sprehe and Dorothee Schneider - the top of the pops was all about Langehanenberg, Werth, Balkenhol and Lutkemeier fighting for a podium spot and a top ranking. Helen and Damon Hill have been part of the wave bringing lightness and harmony back to the show ring and while they were not pushing it to the limit in Balve, they were untouchable with their 80.553 % Grand Prix score, 82.167 % gold medal winning Special score and 87.400% golden Kur mark.

The 31-year old Langehanenberg remains modest about her national title. "I'm simply happy", she commented. Helen still received top scores from the all-German panel of judges even though her tests were not entirely fault-free. With more room for improvement it will be exciting to see what she does in Aachen and Herning later on in the season. 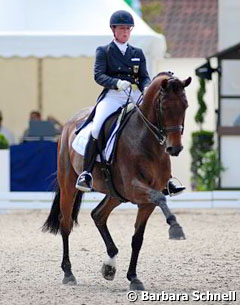 Aboard her 11-year old fiesty Hanoverian Don Johnson (by Don Frederico x Warkant) Isabell Werth claimed double silver with a second place in the Special (78.125 %) and in the Kur (83.300%). If Don Johnson hadn't made two mistakes (in the Special), we might even have got 80%. Still I'm very happy," commented Werth.  Katrina Wust, judge at C in the freestyle, was full of praise of Werth's kur which she called "the most difficult freestyle in the world." Werth agrees that the difficult lines, large amount of tempi changes on curved lines and the transitions between collection and extensions are not for every horse. "Of course it depends on your horse what you can ride, but Don Johnson is now at this high level. I think it's a lot of fun to mare a creative choreography. And I'm happy the judges not only notice it but also reward it."

In the Grand Prix Special Anabel Balkenhol and her 13-year old Hanoverian Dablino (by De Niro x Wanderbusch II) took a place on the third step of the podium for bronze after scoring 76.292%. The highly sensitive chestnut was more focused on his rider and showed highlights in the canter tour. In the Kur to Music the 23-year old Fabienne Lutkemeier was the surprize on the podium after earning 79.250 for her freestyle. Her Hanoverian gelding D'Agostino (by De Niro x Shogun xx) showed remarkable improvement in the passage, but the piaffe remains to be mediocre with all the weight on the forehand and no proper sit behind. Still Lutkemeier, who was the reserve for the German Olympic team last year, is building on her reputation and has been selected on the German team for the CDIO Aachen.