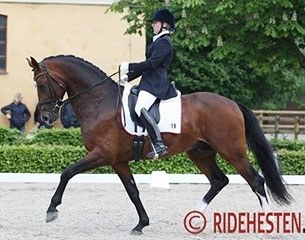 The selection trials for Swedish representation at the 2013 World Young Horse Championships in Verden kicked off with a first qualifier held in Flyinge, Sweden, on Wednesday 29 May 2013. The 5-year old Oldenburg licensed stallion Floricello and the 6-year old Westfalian registered stallion Rausing won the qualifier.

Judged by Annette Fransén Iacobaeus and Lars Andersson, the qualifier not only entailed riding a test but selection committee members Bo Jenå and Susanne Gielen observed from the sideline and briefly worked with each combination after the test.

The next Swedish qualifier will be held in Strömsholm on 6 June 2013.