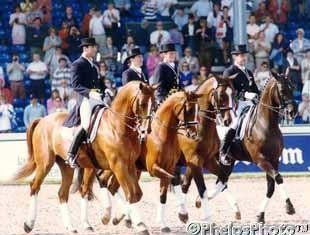 The 30-year old Dutch warmblood gelding Avontuur passed away this morning, one week before his 31st birthday. The bright bay gelding by Ultrazon x Watteau xx was one of America's most successful dressage horses in the 1990s.

Avontuur was hand picked by Kathleen's mom Betsy as an unbroken 3-year old stallion in The Netherlands. After much training from Kathleen and her husband David Wightman, Avontuur rose to the highest level and became an international Grand Prix horse.

"He had an enormous heart and desire," Kathleen and David told Eurodressage. "He will be greatly missed."