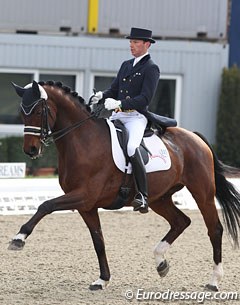 Thomas Wagner from Bad Homburg, Germany, was the new kid on the block at the 2013 German Professional Dressage Riders Championships in Hagen and had first time's charm working for him. The 31-year old rider won the title at Hof Kasselmann in Hagen by winning the short Grand Prix horse change finals on Sunday 21 April 2013.

The silver went to Holga Finken, while last year's champion Bianca Kasselmann achieved the bronze. This was Wagner's second major title in a short period of time. In December 2012 he won the German Upcoming Young Grand Prix Horse Championships aboard Very Keen.

After he successfully qualified for the Finals via the Grand Prix and Special, Wagner said he was feeling relaxed about the short Grand Prix with horse exchange.  That was obviously the right strategy.  He achieved his best score with Bianca Kasselmann’s horse Weltclassiker. “It’s an experienced horse, you notice that immediately“, said Wagner, who brought Amoricelli to the final.  “He’s only been competing at this level for a year, which makes it tricky for the others.“

The 17-year old Oldenburg bred Weltclassiker (by Welt Hit II x Classiker) gave all the finalists a chance to shine: Holga Finken (Kirchwalsede) and title-holder Bianca Kasselmann both scored most points with the dark bay gelding.