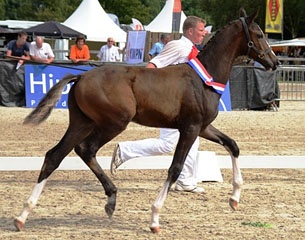 The stallion selection rules have been changed relating to foals inspection following a breeding board meeting on 15 April 2013. The inspection will continue to be two-fold. The breeding board has advised that one part will consists of a group inspection for all stallions at the KWPN centre. A group of foals will be assessed per stallion. The stallion owner is allowed to pick the foals that are going to be presented. Breeders will get a quick overview of the positive hereditary qualities of a stallion from his crop of foals.

The second part will continue to take place at the breeders at home. Per stallion 25 randomly selected foals will be scored and their marks will contribute to the total score of a stallion's crop inspection. Both parts are mandatory.

The central inspection will take place on 24 August 2013.