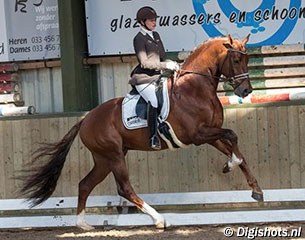 Three Dutch bred horses have received a wild card to participate in the Dutch selection process for the 2013 World Championships for young dressage horses, which will be held in Verden, Germany, on 7 - 11 August 2013. The KWPN society and Dutch Equestrian Federation annually stage one wild card day for horses who were unable to compete in the selection trials last year to be eligible to be submitted to the selection process.

The wild card day was held at Stable Groenendaal in Bunschoten, The Netherlands, on Wednesday 27 March 2013. The selection committee consisted of Wim Ernes, Johan Hamminga and Gert van den Hoorn.

"During the day we saw overall good quality and from that field we picked three horses, who in our eyes are, could become one of the best WCYH-horses of their age division," said Ernes.

The first Dutch WCYH selection and observation trial will be held on Tuesday 2 April 2013, where the combinations have to ride the preliminary test under the watchful eye of the selection panel.