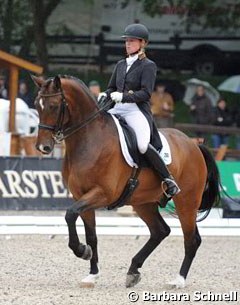 Isabell Werth's positive prohibited medication case will not be heard by the first chamber of the FN Disciplinary Committee on the scheduled date of 11 March 2013. Werth's lawyer has asked for a postponement by submitting a motion for bias.

In June 2012 Isabell Werth's Grand Prix horse El Santo tested positive to the prohibited medicine cimetidine (a stomach medicine) at the Rhinelander regional championships in Langenfeld. Werth denied having treated her horse with this medication and started an investigation. Werth claims a power failure at her barn might have caused contaminated water to being pumped into El Santo's automatic waterer.

The second chamber is expected to make a decision in the next week or two.

If Werth is found guilty for administering cimetidine, she can be considered a repeat offender (after another positive doping case in 2009) and she might face more than one year suspension from competition.