Heartbeat, Danish Stallion of the Year 2013 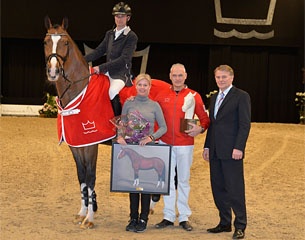 It was the impressive stallion Heartbeat (by Heartbreaker x Ramiro) from Stald Cajus that was crowned Stallion of the Year 2013 and he joins the hall of fame of important stallions which since 1998 have been decorated with this title.

It is not the first time Kari and Jack Munch-Christiansen have the honour of receiving the prestigious title: Stallion of the Year in Danish Warmblood. Back in 2009 their elite stallion Cajus had the honour.

"He is bred in Holland and came to Denmark as a 3-year-old with an impact few before him has mustered," said chairman of the licensing commission Poul Graugaard. "Please welcome Heartbeat," he said and the audience did not have to be asked twice. A very popular choice, indeed.

In the Young Horse Championship he scored maximum points as he received eight times 10. Heartbeat made his debut in international jumping in 2008 and has booked numerous placings and victories. He has sired champion and premium stallions as well as highly decorated mares.

Heartbeat pondered quietly during all the commotion. Torben Frandsen cantered out on the honorary lap and the cheering simply would not stop. Standing ovations followed Heartbeat out of sight.