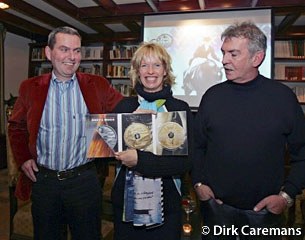 Cornelissen has been riding her old Nutcracker freestyle for three years now. She made her debut to her widely liked music in Den Bosch in 2010. The freestyle brought her gold at the 2011 European Championships, as well as two World Cup titles and silver at the 2012 Olympics.

While Adelinde told to Horses.nl she didn't feel her freestyle needed renewal, she did confirm that she wanted something new and fresh. "I'm incredibly happy with the new kur. There's tons of emotion in it," she said. The degree of difficulty has been upped and the kur will still have her signature piaffe fan.

Cornelissen's new freestyle is called "Tribute To My Red Knight" and is designed by Victor Kerkfhof, a Dutch kur composer who became tremendously famous in partnership with Cees Slings as the in-house composers for Anky van Grunsven. Between 1996 and 2005 Slings & Kerkhof designed all of Anky's signature freestyles, which earned her two individual Olympic gold medals. The duo split up in 2006.

The same year Kerkhof also quit making freestyles after a failed attempt to make a kur for Anky solo. Van Grunsven then went to Wibi Soerjadi, who composed her 2008 Olympic gold medal winning kur. Kerkhof said goodbye to the equestrian world and focused on his job as a music teacher at the Merlet College in Grave, The Netherlands.

Adelinde's new freestyle is the first he has worked on in 8 years. The Dutch rider told Eurodressage that the music is "originally composed" by Kerkhof.