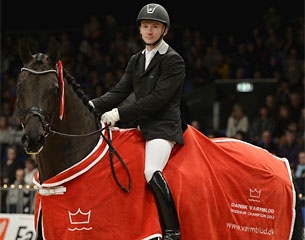 Blue Hors is the main sponsor of the Young Horse Dressage Championship and this year horses, riders and stallions from the stud were dominating.

Winner was Allan Grøn with the impressive and very well educated Zick Flower (by Blue Hors Zack/ x Blue Hors Romanov), bred by Andreas Gregersen. After showing with his own rider Zick Flower received 8 for walk and 9 for trot, canter, rideability and capacity. Hasse Hoffmann tested the beautiful gelding and really enjoyed the ride, describing him as a horse with unlimited capacity.

"It has been a great experience to ride this horse," said Hoffmann and rewarded the horse with maximum score; 10 for rideability as well as capacity. With those scores Zick Flower and Allan Grøn went straight to the lead with a total of 928 points.

The previous leader came second with 911 point and it was no other than stable mate Svalegårds Hottie (by Blue Hors Hotline x De Noir), ridden by Maria Anita Andersen and bred by Else-Marie & Jens Chr. Krabbe.