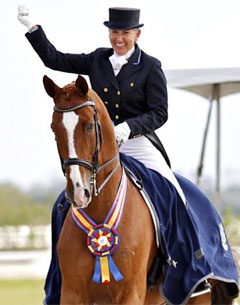 Mette Rosencrantz, of Topanga, CA, and Finally, a 12-year-old chestnut Hanoverian gelding, snared the win in the Grand Prix Special on a blustery Saturday at the 2013 Palm Beach Dressage Derby CDI-W. The pair placed 14th in the Grand Prix Friday afternoon, and Rosencrantz was pleased with today's winning ride down centerline at Equestrian Estates in Loxahatchee, FL. She and Finally scored a 67.875% for the win.

"I think I did a helluva good job!" she exclaimed. "Just one mistake in the ones. Otherwise, I could take anything else. The other day I had a problem from the warm-up to the ring, but today I thought 'I've got nothing to lose.' I think there's a lot of things I could do better, but it was a good test and I was really proud of him."

Finally is a 2001 born Hanoverian by De Niro out of Capri Sonne (by Caprimond). He was originally named Dance of the Lords and has two full siblings, of which one is Du Soleil, which competed at the World Young Horse Championships in Verden.

Evi Strasser, who came in second on Action Tyme with a 67.750%, exited the arena chuckling that she had trouble remembering the test but was pleased with her horse's performance.  "He was amazing, like always, and he gave it his all," she said.  Strasser, from Ste-Adele, Quebec, and Action Tyme, a 13-year-old chestnut Oldenburg stallion, were seventh in Friday's Grand Prix.

Cheryl Meisner, also from Canada, came in third with a 65.000% aboard Tango, a 13-year-old bay KWPN gelding.  The pair placed eighth in the Grand Prix on Friday. "There were a couple little mistakes in there," she said of today's test. "He was a little bit tired but I was happy."

Fellow countryman Lee Tubman of Dunnville, Ontario, was also happier with his ride on Delight. He placed fourth in the Special with a 64.313% after a disappointing 15th in Friday's Grand Prix.  "It went better than yesterday," he said. "There were a couple small problems, but it definitely went better than yesterday."  When asked why he thought there was improvement he answered, "Motivation. Mine and his."

USA's Barbara Strawson finished fifth aboard Amicelli, a 17-year-old chestnut Holsteiner gelding, scoring a 61.875%.  The pair placed eighth in Friday's Grand Prix. Strawson smiled as she left the arena.  "It's getting better every day and every time," she said. 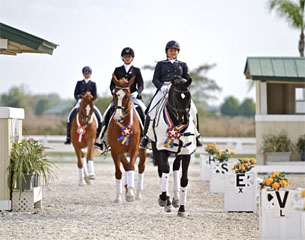 "He was really trying hard," she said. "He was better overall, I think, in the frame and in the rhythm. I think if we can keep going at this pace, I can hopefully get into the 67s and that would be nice to have as a result."

Mattie Zepernick from the U.S. cinched first place in the FEI Junior Individual Rider Test with a 65.553% aboard Wencenza. She smiled as she arranged the cooler she won emblazoned with the words "Palm Beach Dressage Derby" before the presentation ceremony.

"We are slowly and surely getting better," she explained. "I'm getting a better feel for having more expression in all my gaits and it comes from taking risks."