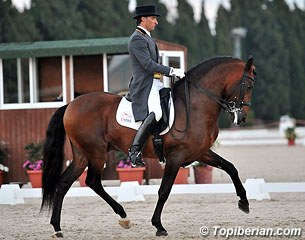 "The best moment of the sunshine tour show for me was the second Grand Prix with Grandioso, because it was a really clean test, with no mistakes, and the horse looked really fresh," Martin Dockx told Eurodressage. "It was also our best ever score at Grand Prix level, for the moment." Also taking out the 6-year old final in week two on his youngster Vaquero HGF (by Cuatrero x Idilio), Martin is happy to have some young talent coming up for the future.

"Vaquero HGF is a 6-year old stallion bred in America," Martin Dockx explained. "His attitude was outstanding the entire competition and we finished the tour winning the classes, after winning the COPA ANCCE both weeks. I also have some other talented horses out competing, and my young Grand Prix horse Encanto XI also had two very good weeks at the Sunshine Tour."

Aboard the elastic grey PRE Encanto (by Evento x Golondrino XIV), Martin Dockx scored 65% in the Grand Prix in both weeks and climbed the ladder in the second week tof a 67% to take second place in the Grand Prix Special.

Both Vaquero and Encanto are owned by Martin's sponsor, Kimberley Van Kampen-Boyer of Hampton Green Farm, who is proud of all her horses and her chosen rider. 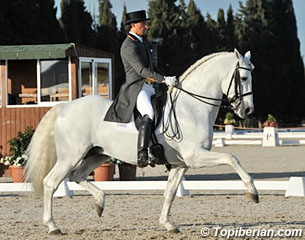 "I purchased Grandioso in Spain as an unbacked 4-year old and I own and bred both Martin's other horses at Hampton Green Farm," Kimberly told Eurodressage. "I am very pleased with Encanto's tests at Sunshine Tour, he is maturing beautifully.  I am especially happy with Vaquero also, as he continues to top the PREs competing at his age level, and also has shown that he is competitive with some very good warmbloods in these young horse classes."

Determined to continue his training with Jan Bemelmans, Martin has set as goal for 2013 to qualify on the Spanish team for the European Championships and keep on boosting that Grand Prix score one percent at a time!

"We were very happy with our achievements so far this year, particularly as we had not shown our younger Grand Prix horse for one year," he said. "We have been very focused on my Olympic partner Grandioso."