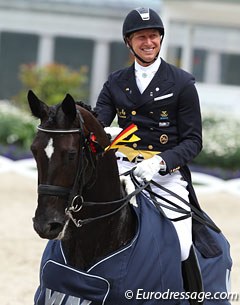 Dutch equestrian publication De Paardenkrant went public with the story of the "Missing Million" which has been circulating on the dressage scene since the summer of 2012. In the sale of top horse Donna Unique the amount of 900,000 euro went missing.

De Paardenkrant's website version Horses.nl published that in January 2012 Andreas Helgstrand tried to put 900,000 euro of the total sales price of 2.7 million euro into his own pocket to the detriment of 50% co-owner Joan Andreasen of brood farm UNO in Denmark.

Kittel was at the time sponsored by the new buyers of Donna Unique, the German Kohl family, who had given him the ride on the World Champion mare as a 2016 Rio Olympic hopeful. In September 2012 the Kohl family ended their sponsorship with Kittel.

De Paardenkrant will be publishing an in-depth article on this deal on Wednesday 13 February 2013. Helgstrand did not want to tell the magazine if Kittel had received a part of the originally missing 900,000 euro.