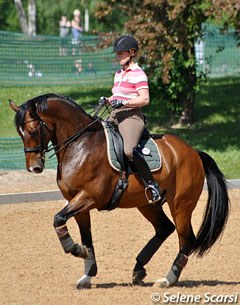 Isabell Werth issued a statement that she is providing full co-operation in the investigation to explain why her horse El Santo tested positive to the FN prohibited substance cimetidine in June 2012.

"For eight months I have known that El Santo tested positive to the medication cimetidine at the Rhinelander Championships in June 2012," she said. "El Santo was not treated with this medication. It is true that Warum Nicht, who stands in the same stable as El Santo, received pain medication based on the severe pelvic injury he had sustained. Because these meds can affect his stomach, he received the stomach medication cimetidine."

Werth confirmed that since she known that El Santo tested positive, "a whole team" has been looking for answers. "Of course I'm personally invested to clear the matter as quickly as possible and I fully supoort all investigations," Werth explained. "One thing is sure. Since El Santo arrived in my barn as a 4-year old he has never received any stomach medication. I'm convinced that when the investigations conclude I will not be personally responsible for this."

Werth stressed that she can not comment any further on the situation as the investigations are still on going.