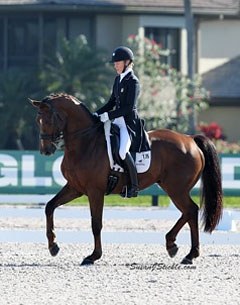 Page beat Michael Barisone and HF Victor, who received a 66.277%. Third place went to Ryan Garza and Oleander, who scored 63.191%.

Woodstock, a ten-year-old KWPN gelding by Havel x Contango, is a new horse for Page since mid-December. He showed in a couple of national grand prix classes in France and is now having success under his new rider.

"He has three beautiful gaits," Page described. "He has a temperament that is so brave and willing and content to work, and he is a highly collectable horse for grand prix. He is just absolutely beautiful."

"He came from an amateur who loved him," Page continued. "He had not had a lot of professional training, but what he had was good, and the intention around the horse was excellent. He has learned that life is good!"

Page's goal for this week was just to take Woodstock out and see how he was at a show, in the warm up area and actually competing, relative to how he has schooled at home. She wanted to have a point of reference to develop his competition schedule for the year.

"I needed to see how he changed," she noted. "Did he stay the same? Did he back off? I was delighted to discover that he is ostensibly the same in the warm-up and the arena. He was particularly brave in the arena. My goal was not to go for every point. I just wanted to ride a nice, accurate test and I was delighted that just riding quietly movement to movement, his marks were good enough for over 70%. That speaks for the basic quality of the horse for sure." 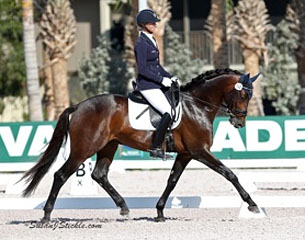 Page also had a great week with several horses and riders from her Stillpoint Farm competing. Kevin Kohmann and Zephyr, owned by Suzanne Dansby, won both FEI Prix St. Georges - Open classes and Greta Fresian was second in both classes on Page's horse, Ice Cap. Nicolas Fyffe and Tolstoy won both Intermediaire-1 classes.

A new face to the show ring in the USEF Second Level Test 2 - Open was Ripline, a five-year-old Danish Warmblood stallion by Hotline, ridden by Heather Blitz and owned by Oak Hill Ranch. They had the show's high score on Tuesday of 76.711%. Second place went to Christopher Schruefer and Federer, who scored 70.658%.

The high score on Wednesday's competition was 73.600%, which went to Gabriel Meyer and Drum Major in the USEF Training Level 3 - Open.