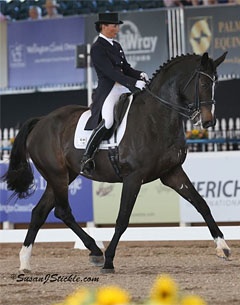 Mikala Gundersen added a victory in the Grand Prix Special CDI5* at World Dressage Masters (WDM) Palm Beach to a growing list of accomplishments at Jim Brandon Equestrian Center this winter. Gundersen and My Lady, a 13-year-old Danish Warmblood mare, were third in Thursday's Grand Prix at Jim Brandon.

They also finished just out of the top eight in Friday's Grand Prix CDI5*, taking ninth place with 68.447%.

Gundersen, who earned a score of 69.479% for her ride, described her sometimes challenging relationship with My Lady. "This is an alpha mare," Gundersen explained with a smile. "She has a huge personality. She knows what she wants and she thinks she knows everything better. We have a little bit of discussion sometimes in the ring because she knows exactly how everything needs to be done and apparently I don't know anything."

But Gundersen has high praise for the mare. "She wants to go and do her best," Gundersen noted. "She has presence and strength, and my favorite thing is when we come down the last centerline, she gets better and better."

James Koford rode Rhett, a 13-year-old KWPN gelding, to a second place finish in the Special with 67.333%. Koford, whose recent successes include wins in the Grand Prix at the 2011 International Horse Sport Champions Cup CDI3* and the Grand Prix Freestyle at the 2012 Wellington Dressage CDI-W, also competed at last year's WDM Palm Beach. 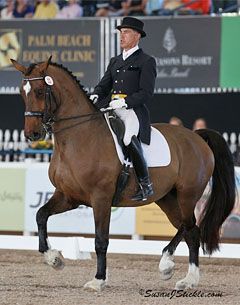 Brooks, who was making her third appearance at WDM Palm Beach, explained why she keeps coming back. "Every time you get invited to a thing like this, it's fantastic," she said. "The more you do it, the more you appreciate it coming in, because you know how significant it is, and how many people, how many sponsors, and how much work it is to put an event like this together."

Fourth place went to Cheryl Meisner and her own Tango, who are coming off a series of improving performances at Jim Brandon. The judges awarded them a score of 66.208% for today's test. The duo took third in the Grand Prix at the 2012 Dressage at Devon CDI-W and earned a pair of seconds at the Milton CDI-W in Ontario. Tango is a 13-year-old KWPN gelding.

Silvia Rizzo and Donnerbube II took fifth place with 64.917%. Rizzo, a native of Italy, resides in Germany. She and Donnerbube II, a 19-year-old Oldenburg stallion owned by Michele Betti, picked up third and fourth place finishes in the Grand Prix Special and Grand Prix at the 2012 Warsaw CDI3*.

Saturday evening at World Dressage Masters Palm Beach will feature the return of the top eight riders from Friday's Grand Prix CDI5* as they perform to music in the Grand Prix Freestyle CDI5*.