Zonik and Valentino Sold to Glock 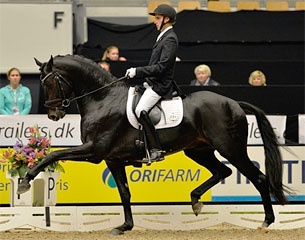 Glock acquired the Danish warmblood stallion Zonik (by Zack x Romanov) which became 2012 Danish Young Horse Champion under Andreas Helgstrand at the Young Horse Nationals in Odense, Denmark, mid October 2012. The 4-year old Zonik is bred by Linette Jæger and was owned by Andreas Helgstrand. The dark bay stallion became a premium stallion at the 2011 Danish warmblood licensing and he finished third at the 35-day stallion performance test in Vilhelmsborg with a score of 8.35 points the same year. Valentino is originally named Versace and was presented at the KWPN licensing in 2005. He sold to Mikala Lindh and Poul Fabricius-Bjerre and in 2006 he was licensed at the Danish warmblood stallion licensing in Herning. Finnish Grand Prix rider Lindh trained the horse, who got gelded, and she competed him in Denmark at small tour level this year.

Zonik and Valentino are the second and third horse owned by Glock which Gal and Minderhoud get to ride since the Austrian gun company started sponsoring the duo in February 2012. Undercover was the first horse Glock gave to  Gal.

"The two horses will now be given time to explore their new surroundings and get used to their new careers under the care of Hans Peter Minderhoud, Edward Gal and Nicole Werner," Glock issued in a statement. "The training will start with some easy exercises before plans for the future are made."