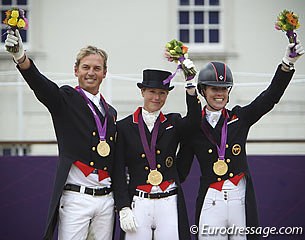 The award places equestrian as a priority one funded sport alongside the likes of cycling, rowing, sailing, gymnastics and athletics. This allocation of Lottery and Exchequer money, via UK Sport, enables the sport to continue to maximise its successes on the World, Olympic and Paralympic stages as well as helping to develop elite riders for future success in the four Olympic and Paralympic disciplines of showjumping, dressage, para-equestrian dressage and eventing.

The funding has established the World Class Performance and Development Programmes as the envy of the international equestrian world. Its aim is to have in place a sustainable system that can deliver more medals on the international stage now and in the future through the provision of a range of services and support.

Chief Executive Andrew Finding commented:
"2012 has been a very good year for Equestrian sport and we are thrilled with this award. Success comes with outstanding team work and I want to pay tribute to a Government that's put so much faith in sport, to UK Sport, the National Lottery players, British Dressage, British Eventing and British Showjumping, the owners of the horses, Performance Director Will Connell, the support staffs and coaches and of course the athletes who deliver the results."

"Liz Nicholl, UK Sport's Chief Executive, told me that ours was 'a very, very good bid'. This was made possible with the entire operation working in a single minded, mutually supportive and focused manner. Now we can concentrate on more medal success in Rio with the broad support we need - it continues to be an exciting time."

Although the funding represents a significant increase on paper from the previous Olympiad, differences in the way that this must be spent means a direct comparison is not straightforward. Equestrian Performance Director Will Connell added caution:

"2012 was a very satisfactory conclusion to a journey that started in 2005 when London was awarded the London 2012 Olympic & Paralympic Games. We have been working on the Rio plan since 2011 and now we have the funding figures we will be able to add the final detail. We also need to look at the detail of the Rio funding Agreement as there will be some changes from the London Olympiad and way the funding is managed and spent."

"We are extremely grateful to the National Lottery and for the Exchequer funding allocated to elite sport. The funding makes a difference and we look forward to working with UK Sport over the coming years."

With news that substantial funding is now available for the coming four years from both Sport England and UK Sport, the future looks bright for work to progress in equestrian's successful elite and grassroots programmes. The British Equestrian Federation will continue to work with its Member Bodies and the wider equestrian community to ensure a lasting legacy from 2012.