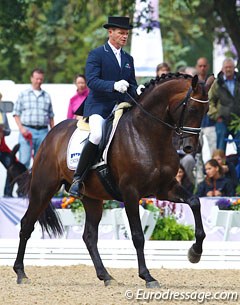 The Trakehner licensed stallion Grand Passion has moved from his French home base in Vidauban to Framersheim, Germany, where he will be trained by Dorothee Schneider.

Owner Brune made the decision to move Grand Passion to Germany in order for her horse to be trained by the best. "To me she is one of the best trainers in Germany," Brune told Eurodressage. "I think he is a very good horse and as she lost her Diva Royal maybe it is a possibility for her to have a new young horse to prepare for the high level."

Brune makes it no secret that one day she wants to see one of her own horses in some of the biggest dressage arenas of the world. "My wish would be to go and see him with a top rider at a top competition," Brune explained.