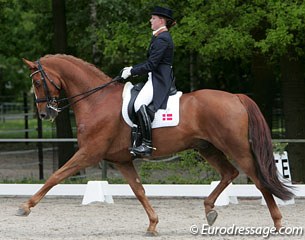 Quite a few changes have taken place in the life of 2012 European Young Rider Champion Cathrine Dufour. The sympathetic Danish dressage rider sold one of her long time horses and bought a Grand Prix schoolmaster for the Under 25 classes instead.

Dufour sold her second junior rider's horse, the 15-year old Aithon (pedigree unknown) to Swedish former pony rider Ebba Deijenberg. The tall chestnut gelding has been with Dufour for four years and their biggest success was winning team and individual gold at the 2009 Nordic Baltic Championships. Deijenberg was a Swedish team rider at the 2010 European Pony Championship team member aboard pony Bambino. 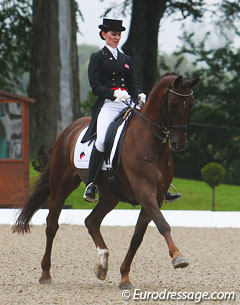 The Dufour family immediately re-invested in a Grand Prix horse for Cathrine. They acquired the 12-year old Westfalian gelding Danielo (by Danny de Vito x Damenstolz) which was competed at Grand Prix level by Danish Ann Sophie Berger. The latter competed the liver chestnut gelding at the 2010, 2011 and 2012 Danish Grand Prix Championships as well as at several CDI's.

Dufour hopes to make the transition to the Under 25 classes with Danielo. The horse is currently stabled with her trainer Rune Willum but will soon move to breeding station Atterupgaard, where Dufour is riding the horses.