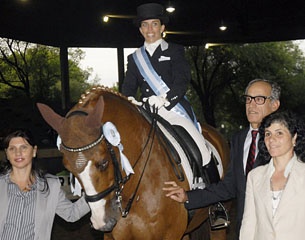 The Nationals featured classes at many levels with 55 riders competing, but the Grand Prix only had one rider, who performed a Grand Prix and Kur to Music during the weekend. The tests were judged by Cesar Lopardo Grana, Claudia Mesquita, Sandra Smith, Lilian Ianone, and Andrea Guerreño.

Bred and trained by Manfredi's coach Enrique Sztyrle, Rec Gauchito is an Argentinian bred chestnut gelding which initially was a show jumper but tuned to dressage at the age of 6. In 2011 he partnered with Florencia to win the Argentinian Championships at small tour level and in 2012 the pair competed in Wellington, Florida.

"It's my second Championship, but it is the first one in Argentina at Olympic level. I'm very proud for achieving this level with Rec Gauchito, a horse which me and my trainer took to this level," Manfredi told Eurodressage.

Manfredi is now aiming to compete at the South American Games in Chile in 2014.