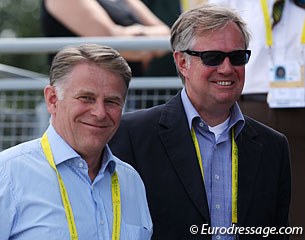 Danish Jan Pedersen, president of the World Breeding Federation of Sport Horses (WBFSH), presented the activity report of his federation at the 2012 General Assembly held in Newmarket, Great Britain, on 6 - 7 November 2012.

Since 2009 the horse breeding sector has been heavily affected by the global financial crises having had the result that the number of coverings has been going dramatically down in most studbooks. This fact is connected with a somewhat dull market especially for horses of average quality while the market for top-class horses seems to be more or less unaffected by the difficult times.

It is my impression that the present situation makes it difficult for many studbooks to preserve the same level of activity, the same number of breeders and the same financial power that they had before the crises. The horse breeding sector has been shrinking and shrinking to a degree that makes the horse dealers worry. They worry because it is self-evident that soon we shall experience a shortage of horses, because the number of riders and participants in competitions has not been going down concurrently with the number of horses born. So we can anticipate seller’s market resulting in higher prices, and an increase in the number of horses born. To me it has been a surprise that this revival did not start already during this year’s breeding season. However, there could be other reasons than the financial crises for the decrease, and it would be interesting to discuss the situation in this forum.

Fortunately the good collaboration with the FEI could be further developed in 2012. The Executive Committee and I had a first very good meeting with the new FEI Secretary General, Ingmar de Vos in February. Main items were our cooperation, the development of data exchange, and the championships for young horses in all three Olympic disciplines.

After the meeting a Memorandum of Understanding was signed. The memorandum describes the intention of the FEI and the WBFSH to enter into negotiations for the purpose of concluding an agreement concerning a secure data exchange HUB and the intention to renew our agreement for the World Horse Ranking Lists in jumping, dressage and Eventing.

After the decision to allocate the World Breeding Championships for Young Dressage Horses to Verdener Turniergesellschaft until 2015 the showgrounds of Verden once again provided a beautiful setting for these championships in the beginning of August.

Unfortunately the event fell together with the Equestrian Grand Prix of the Olympic Games on Thursday and Friday in London. That worried us a lot, but it did not seem to influence the event much and we had a very large crowd there – like every year. The quality of the horses was high but one horse, a 6-year-old mare originating in the British Hanoverian Horse Society, Woodlander Farouche, outshined all the others and won with the highest score ever in the history of these championships; 9.88. Woodlander Farouche was ridden by Michael Eilberg.

The class for 5-year-old horses was won by the Oldenburg gelding Sa Coeur, sire Sir Donnerhall, brilliantly ridden by Eva Möller. Result: 9.38.
Once again these championships showed a close connection between breeding and riding. Many of the most successful horses competing were sired by former winners or successful participants in these championships.

Thanks to our persevering sponsor agent, Xavier Libbrecht, we are close to signing an agreement with a new main sponsor. We expect to sign a contract before Christmas.

In the report of our Department Promotion you can read more about the rankings and how the calculation is done. The system has often been questioned and discussed. However, with the tools that we have at our disposal now, we believe that it is the best possible system right now, bearing in mind that it does not necessarily reflect the relative strength between the studbooks. The studbooks are so different and the question is if it is at all possible to compare them through a simple competition. One thing is for certain: the top-ranked studbooks are the best in this specific competition that we have set up and agreed upon.

The press and the development and updating of the website are the responsibility of the Department Promotion. Our press officer, Mr. Thomas Bach Jensen has prepared a short paper on future goals for this work. If you should be interested in learning more about it and if you have any ideas concerning the press work Thomas will be at your disposal at any time.

Through the Breeding Department the WBFSH has put a lot of effort and time into the very important data exchange project. The system is about ready but it is difficult to get it off the launching pad because it is not interesting to anyone before especially the big studbooks are on-line for exchanging data. So here is an earnest request to the studbook managers: Please join this important project and have your IT experts working on it.

The FEI position was expressed very clearly by FEI Secretary General, Ingmar De Vos, when we met with him in Brussels in the spring: The FEI is very interested in connecting breeding databases with the FEI database and they will send us sporting data in exchange of breeding data. But - if nobody starts, nothing will happen!! It is important that you all cooperate on this. It is one of our major goals, as was the development of the unique life number which makes this data exchange possible. The development and implementation of the unique life number was step 1. This is step 2. It would be a shame not to take it. By implementing this system your studbook will save money and time and avoid errors in the exchange of data.

In our board meeting the day before yesterday it was put forward that some legal clarification concerning i.a. ownership of data was needed. Therefore we will – as soon as possible – set up a meeting with the FEI and legal experts for this clarification.

During the General Assembly of WBFSH in Seville October 2011 you were informed about the X-ray harmonisation seminar held in Amsterdam. The next step of this harmonisation process is a meeting at the central database Cirale in Normandy, France, on December 18th-19th 2012.
I will not go deeper into the financial situation of our federation – for that I refer to the report of the financial report - but just note that our economy is in a good state.

The federation is still growing – this year we have received 5 membership applications. With this I conclude the activity report of the board. I have only touched lightly on the reports from the various departments as they have been published on our website for some time now.