The World Keeps Turning: Totilas to Stand at Stud in 2013 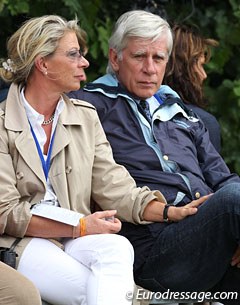 A day later, a new story. This is how it goes in lala horse land. While Paul Schockemohle told Spiegel two days ago that Totilas would not be standing at stud in 2013, today the story has taken a 180° degree turn. There will be fresh Totilas' semen, but the stallion will be covering less.

"It's all nonsense," Schockemohle told St. Georg. "He's coming back to Muhlen for three months in the winter." However, Totilas' breeding duties will be reduced during the show season. "Next year we won't be breeding in the morning and going to a show in the afternoon."

The past two years it was initially decided to have Totilas only breed until May, but "based on the great demand we decided to breed him all year round," said Totilas' co-trainer Klaus Martin Rath.

Less breedings at 8,000 euro a pop means less money in Schockemohle's pocket, as he owns the breeding rights to the stallion. Co-owner Linsenhoff will not be pitching in to cover the lost money.  "I don't expect that. I'm too much a horse person for that," Schockemohle stated.

The stallion owner is optimistic about the future, especially since Matthias Rath started training with the controversial Dutch coach Sjef Janssen. Matthias weekly travels to Erp, The Netherlands, with Totilas and three more horses to train there for three days.  "Jansen will be bringing continuity to the training, which suffered from the high breeding demand," Klaus Martin Rath commented.

The German branch of PETA recently pressed charges against Totilas' owners for animal abuse because of the LDR-training Totilas now has to undergo as well as the fact that the stallion has to live in isolation from other horses because he's a breeding stallion.  The charges are now being looked at by the Frankfurt Court House. "We haven't heard anything, just read about it," said Rath. "The prosecution will certainly see that Totilas and our EU-breeding station are under constant official veterinary control and there have never been any complaints."