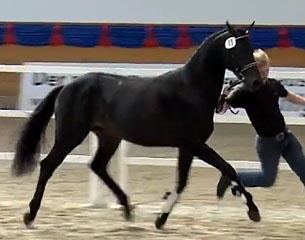 A dark bay Quaterback offspring out of a full sister to the late World Young Horse champion Poetin (by Sandro Hit x Brentano II) was named champion of the 2012 Brandenburg Stallion Licensing in Neustadt, Germany on 15 - 17 November 2012.

The still nameless champion by Quaterback is bred and owned by the State Stud Neustadt/Dosse and is out of Poetin III. He sold at auction for 130,000 euro to State Studs Sachsen-Anhalt and Moritzburg.

The average price for a licensed stallion at the auction was 67,272 euro.