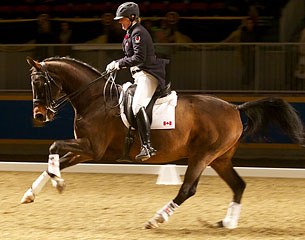 Brooks started competing the now 17-year old Oldenburg gelding by Grannox x Goldstern when he was a 5-year old. The pair became one of the most successful and consistently scoring duo's in Canadian dressage history.

They won team silver at the 2003 Pan American Games in Santo Domingo, Dominican Republic, and qualified on the Canadian team for the 2006 World Equestrian Games in Aachen and 2008 Olympic Games in Hong Kong. They also competed at the 2007 World Cup Finals in Las Vegas.

Gran Gesto gave his final public performance in front of the Canadian crowd at the Royal Winter Fair. The dark bay gelding will now enjoy a happy, retired life at Jacquie's barn "Brookhaven".

"I would like to thank everyone that came out and made Gran Gesto's retirement so special," said Brooks. "He is an amazing horse and loved seeing all his people last night. Thanks for making it such a great party!"