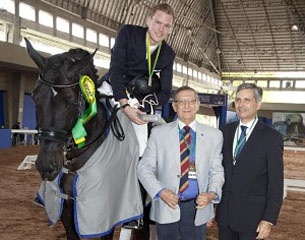 Finnish Grand Prix rider Henri Ruoste made heads turn when he took the lion's share of the trophies at the 2012 Amil Dressage Cup international invitational dressage event in Sao Paulo, Brazil, on 12 - 14 October 2012.  Ruoste and the Hungarian bred Jojo AZ (by Ginus x Justboy) swept the board in the Grand Prix and Kur to Music.

Ruoste and the 9-year old Jojo AZ were part of the eight rider-horse combinations invited to compete at this indoor CDI. They were flown over directly to Brazil to join Brazilian home rider Dr. Jorge de la Roche with his Dutch warmblood Valentino G for this small, intimate competition. 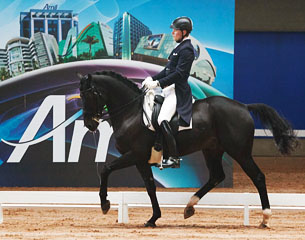 Hubertus Schmidt, who regularly travels to Brazil with judge Mariette Almasy to train show host De La Rocha, won the Special with 69.82% but it was Ruoste who put the  high scores on the board. The Krefeld based Finnish rider, who recently started his own training and sales facility in partnership with Joachim Arl, posted a score of 74.85% winning the kur ahead of Bianca Kasselmann on 2000 PSI auction price highlight Weltclassiker (by Welt Hit II x Classiker).

"Brazil was an amazing experience. I was a little worried 'flying' to a show as I had never done it before, but everything was taken care of really well and the horses arrived happy and fresh to the show ground," Ruoste told Eurodressage. "The show organizer went all the way to make sure everything was up to the best standards for the horses and riders. I think they did perfect job!"

Ruoste was extremely pleased with the achievements of this horse. "For me the Grand Prix in Brazil was almost as good as at the CDI Leudelange few weeks before, where Jojo really did an amazing test," he said. "In the kur he felt a little tired, but nevertheless he was able to produce two really good tests! JoJo has been with me for only five months and has really grown to be one of my all-time favorite horses." 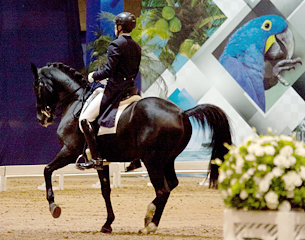 The impressive black gelding Jojo has stayed behind in Brazil to become the future equine partner of the fit and ambitious 67-year old De La Rocha. "Jorge is a long-time friend and he wants to try to qualify one last time for the 2016 Olympic Games held in his home country Brazil," said Jojo's previous owner Joachim Arl. "With Valentino G and Jojo AZ he has two super horses up for the task."

Though Ruoste had to say goodbye to this rising Grand Prix horse, the 30-year old will move on with his other Grand Prix horses Don't Forget, La Scala, and newcomer in the barn, Nadine Capellmann's Antonello (by Ad Hoc x Florestan). He is is looking forward to the future and has said he is welcoming new clients to his barn. The Finnish rider is fully focused on training students and horses up to Grand Prix as well as selling talented horses together with his business partner.