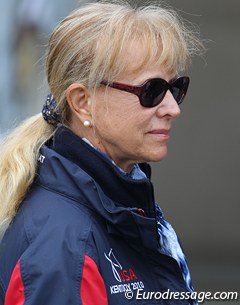 Anne Gribbons, the Technical Advisor to the U.S. Dressage Team since December 2009, has informed the USEF she does not wish to be considered for the position after her contract expires November 30, 2012.

"It has been a privilege and my pleasure to spend the past three years working with the greatest of our American dressage athletes," stated Gribbons. "I wish them all the best of luck and much success in the future."

Gribbons served as Technical Advisor to the U.S. Dressage Team at three international championships during her tenure with the USEF. At the 2010 Alltech FEI World Equestrian Games, Gribbons guided the U.S. to a fourth place team finish and assisted Steffen Peters in winning two Individual Bronze medals with Four Winds Farm's Ravel. At the 2011 Pan American Games in Guadalajara, Mexico the U.S. Dressage Team had a historic medal sweep of all three Individual medals in addition to winning Team Gold. In the summer of 2012, Gribbons led the U.S. to a sixth place finish at the 2012 London Olympic Games.

"Anne brought a clear vision to the position, especially regarding the need for developing programs and how they should fit together into a pipeline. Her impact will be felt for a long time to come as we continue to develop those programs," said George Williams, Chairman of the High Performance Dressage Committee and President of the United States Dressage Federation. "The elite riders benefited from her unique perspective as a rider, trainer and international judge. Anne's hard work, commitment and enthusiasm will be missed."

A meeting of Eligible Athletes is being planned in the coming months to discuss the future of U.S. Dressage.