Hold on to Your Safety Hat, Helmet Rule in Place 1 January 2013 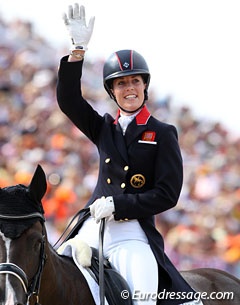 Safety comes first, but second only to the wishes of the US Equestrian Federation, which apparently wanted to give the equine community more time to safely adjust! Finally coming into place on 1 January 2013, the safety helmet rule will come into effect a year later than originally planned.

While riders not going to or from the stable to the warmup area and the competition arena for an actual competition, must wear a safety helmet when mounted anywhere on the show grounds, dressage riders may still use a top hat or bowler, so long as they match certain criteria.

"Athletes 18 years and older, riding horses seven years and older may wear a top hat/bowler instead of protective headgear at the actual competition and the warming-up directly prior to the competition (with no break before the competition), which includes riding between the stable and the warm-up area, riding of the competing Horse in the warm-up area, and riding back to the stable. Riders in violation of the rule will be prohibited from further riding “until the protective headgear is properly in place.” 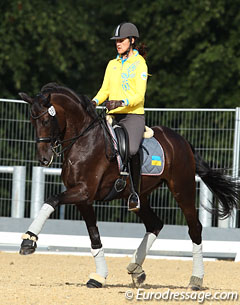 If a rider refuses to comply with a request by an official to wear properly fastened “appropriate helmet and headgear that is in compliance with the applicable international testing standards,” a yellow card will be issued to the rider. After two yellow warning cards, the athlete will be automatically suspended for two months.

"The Yellow Warning card system was proposed by the FEI Bureau on the recommendation of the FEI Medical Committee," said Grundy. "A yellow warning card in this situation is no different from a yellow warning card for other situations and therefore cannot be erased. A yellow warning card will be given to athletes who refuse to comply with a request made by an Official that they wear protective headgear. Stewards will therefore be instructed to first ask an athlete who is not wearing a safety helmet to put it on. If an athlete fails to, or refuses to, the athlete will receive a yellow warning card. Should the athlete receive a second yellow card at the same, or at any international event within one year of the first one, s/he will automatically be suspended for a period of two months from the day following the event at which s/he is competing."

Warning cards may be issued by a member of the Ground Jury, a member of the Appeal Committee, or an FEI Steward, and Ruth added that From 1 January 2013 at FEI Events, all riders will be required to wear Protective Headgear while mounted on a horse on the showgrounds, just now the following exceptions have been made to the rule:

1.  The discipline rules will apply in the competition arena/field of play. So, for example, while eventing riders are always required to wear a helmet during the cross country, dressage riders can still wear a top hat/bowler while competing and vaulters do not have to wear a helmet while they are in the arena actually vaulting the horse. This also means that the exception in the jumping rules for ceremonial protocol still applies to the jumping riders, but this will be discussed further during the rules revision for the discipline next year. 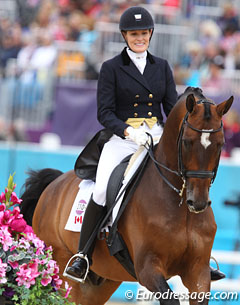 2.  The exception above extends to riding from the stables to the warm-up area or competition arena just prior to competing (and from the warm-up directly to the competition arena). This is primarily for the dressage riders and reiners so they do not have to stop to change their headgear after warming up just prior to entering the arena. However, if they are riding to a training area when they are not about to compete or on a non-competition day, a helmet will be required.

While several of the world's top riders chose to already wear the safety helmet in London, others, though aknowledging the safety aspects of our sport, also like to keep a little bit of history alive. "I did chose to stick to wearing a top hat in London," says Canadian Olympian David Marcus. "I wear a safety helmet in training, but I like the tradition of the top hat in competition."