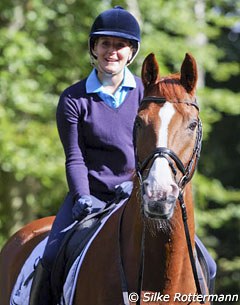 German B-team rider Carola Koppelmann has retired her 19-year old Hanoverian Grand Prix horse Le Bo. The chestnut gelding did his last competition at the CDI Verden in August 2011 but has now been officially retired at the Celle Stallion Parade on 7 October 2012.

Koppelmann's Le Bo is bred by Heinrich von Allworden and sired by Lauries Crusador xx out of an Eisenherz dam. Carola discovered the horse as a 3-year old and trained him to Grand Prix level herself.

Le Bo was a successful dressage horse from the start. As a 5-year old he became reserve champion at the 1998 Bundeschampionate in Warendorf and he finished fourth at the 2000 World Young Horse Championships in Arnheim, The Netherlands. He made the transition to S-level as a 7-year old and made his international Grand Prix debut in 2003.

Between 2005 and 2011 Le Bo was a very consistently performing Grand Prix horse with top placings at numerous high profile international competitions throughout Europe.

"He's 19 now and will enjoy some hacks, going out in the paddock with a buddy and be a schoolmaster, teaching the movements a bit to students," said Koppelmann.