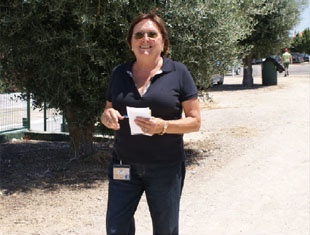 Being invited to have a lesson with O-judge Mariette Withages was an amazing opportunity I couldn't pass up on. I saddled my 6-year old Lusitano Batialo to get instructed by one of the world's most prestigious judges. I was pleased to find out that besides having built up an illustrious equestrian career, Withages is also just a really lovely person.

Beginning her judging career in 1969, Mariette Withages has judged at six World Cup Finals, was President of the FEI dressage committee, she became the first woman President of the Ground Jury for the 1998 World Equestrian Games and has been an organizer, manager and judge for competitions world wide.

The lesson was one of the most effective 45 minutes I have ever had, although this does not leave a lot of time to nut out the deeper issues.  The small snippets of advice she gave me, sometimes with just one word or phrase, would nearly sum up an entire aspect which needed work! At the beginning of the lesson she asked me about my horse, what we were working on and I told her that he is a 6 year old, with an intelligence and a fun personality, beyond any horse I know, and that I think once we have consolidated the basics, he learns so quickly that the tricks will be no worries.

She told me to begin as we usually do, so I walked on a long rein and then began a slow trot with him in an open and stretching frame. She wanted him even longer, and more open in the gullet, so gently and while attempting to simultaneously slow the rhythm, I allowed him to open more in front. Gradually, as we slowed the rhythm and he lengthened out, I could feel his entire body loosen and his back begin to swing. "There now, that is true cadence," said Mariette. 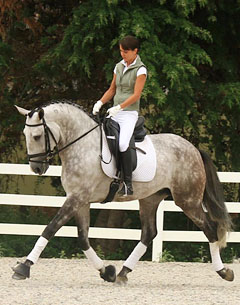 We began the canter also in an open warm-up frame and on the circle I was told to rotate my inside hand, turning my thumb toward the outside and then gently apply the inside rein aid with my hand at the 90 degree angle. It was amazing to feel how the horse responds with the simple action of turning your hand over, because effectively it allows you to open the rein without having to move your hand from the "cockpit".

That is her term for the area where the hands should remain and I quickly learnt that my cockpit was more like a paddock. What I had previously thought was correct -- taking the hand out so not to pull back on the horses mouth --- was actually also pulling my body out of its equilibrium and allowing the horse to fall in through the shoulder.

The canter quickly began to achieve more jump and balance as Batialo responded to the inside aid and my allowance of the outside rein in the correct direction towards his mouth. It was obvious how much this had freed up his body when we returned to the trot and as Mariette asked me to slowly let the reins out, I could feel Batialo swing forward to an even greater degree and fully relax into the work!

My position is of course something I worry a lot about, as should every rider, and I asked Mariette to pay particular attention to what areas I need to work on. She said of course that I needed to work on keeping my hands in the cockpit which I found the next day, when using the rotation technique, to be much easier to accomplish! The second thing was that I was coming slightly back in my seat and with one simple phrase from her I was able to put all the pieces together in an instant. Now when I am riding around and I feel like Batialo is responding to a weakness in my position, I just think 'open the drawer'. Mariette was referring to the part of my lower belly and that by expanding, or opening up that area, I would not only come forward, but would also expand my hip area, lengthen down through my legs, sit up taller, which of course allowed me to swing along with my horses back muscles. “Should feel like a wobbley pudding!”

After the warm-up, we began in sitting trot to tackle the shoulder-in and half passes and try to cement in my mind the angle and bend needed for these movements in a test. Coming around the corner I would do a small volte, sitting the horse back with at least four half-halts on my way around the circle and then when I reached the wall I would allow the horse to continue the volte for one stride and then with my inside leg back, applying pressure to the widest part of the horse behind my leg, I would ask the shoulder-in, ensuring that the weight was being transfered into the outside rein and that the bend was not being forced by a strong inside rein. "For a good shoulder-in you must be able to relax the inside rein!" The same in the half-pass and coming off a half volte, I would place my inside leg back, open the drawer to ensure I didn't twist my body and block the horse from the inside aids and then push across while applying little half-halts on the outside rein to sit him back and make him use his hind quarters. 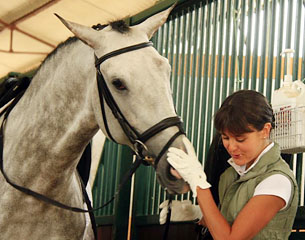 The walk is another thing I worry about as a rider, as I so often see riders shortening up the walk and blocking the horse's true natural march! Mariette says my horse has a "big walk", that the rhythm is good and that he overtracks by two steps, so I can breathe easy.

Overall I felt the lesson was highly beneficial, in that just the use of simple reminders can put things into greater perspective. The level of looseness, cadence and swing I was able to achieve just by having an expert eye on the ground was just incredible. Mariette agreed that my horse's mind is fantastic and I know this to be true, for one simple reason: He makes me laugh out loud at him everyday with his funny, inquisitive behaviour.