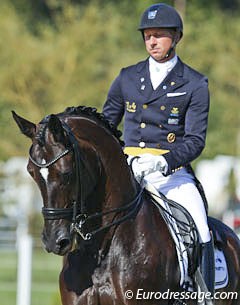 Edwin and Arlette Jasper-Kohl have decided to end their sponsorship of Swedish Grand Prix rider Patrik Kittel and have given the ride on their top mare UNO Donna Unique to German Olympic individual medal winner Ulla Salzgeber.

After three years of successfully working together the Kohl family decided in mutual agreement to part ways with Kittel.

"Our wish that Patrik Kittel could manage our top horses here in Perl-Borg together with his own competition barn in Nottuln and his show schedule could not be fulfilled," Arlette Kohl commented.

"With my ever growing stables, and consequent inability to move to Gestuet Peterhof,  Family Kohl and I have come to the mutual decision to go our separate ways," Kittel explained. "To manage two competition stables at the level I aspire for was not possible, and so the mutual decision was made to move forward."

The Kohls recently built a brand new state-of-the-art facility in Perl-Borg and want to have their horses with them at home, which forced Kittel to commute between two barns. The Swedish rider trained the horses at Peterhof from Monday through Wednesday and then return to Nottuln.

Florett As was re-allocated to a different rider a while ago, but Silvano and Donna Unique were part of Patrik's active show string. The Kohl family had also bought the young top dressage horses Derano (by De Niro) and the Danish bred stallion Sezuan (by Zack) for Patrik to ride. 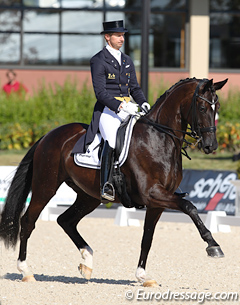 Aboard Donna Unique (by Don Schufro x Falkland), Kittel qualified himself for the Nurnberger Burgpokal Finals this year with a record score. The ride on the talented black mare has now been given to Ulla Salzgeber.  The 2004 German Olympic silver medallist will do the commute between her south German stable in Blonhofen and Perl-Borg with more time on her hands since she decided to give her Grand Prix horse Herzruf's Erbe a one-year break in the field.

"I can rely on my excellent team at home in Blonhofen," Salzgeber said about leaving her farm behind to ride at Gestut Peterhof.

"We are looking forward to our co-operation with Ulla Salzgeber," Arlette added. "We are thankful to Patrik Kittel for his commitment. Of course we are still friends and wish him all the best in the future."