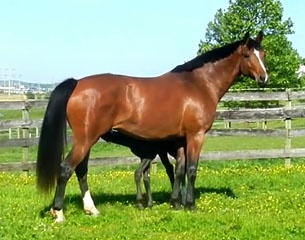 The 2012 Devon Breed show at the CDI Devon continued on Wednesday 26 September 2012 with a number of in-hand classes in which winning can be as much a function of the handler as the horse. The competition in the championship classes was stiff. Beatrice VDL (by Prestige VDL x Lorentin I), a bay Dutch warmblood mare won the Devon Grand Championship.

Bred by VDL stud in The Netherlands and owned by Pieter Ruig from Shelter Island, NY, the 6-year old KWPN mare Beatrice VDL was also the proud winner of the Mature Championship.

The Materiale Championship was won by Don Frederic HVH (by Don Frederico out of EM Wruffian Q), bred by High Valley Hanovarians. Sir Wanabi (by Santorini out of Lily Germaine) took home first place honors in the Stallion Championship.

While the handlers sometimes go unnoticed, Phil Silva caught the eye this year as the Dressage at Devon’s first helmeted-handler. Silva’s unusual head gear was the result of his discovery through the school of hard knocks that horse-handling can be hazardous to the health. In August he was kicked in the head by a horse he was showing. The impact left Silva not only with black and blue bruises, but also with a dose of fear he’d never experienced before. He knew he needed to find a way to conquer the fear. Then one day at a show he saw helmets for sale and bought one on an impulse.

“I never thought I’d have a helmet, but it’s given me a second chance, and allowed me to continue to pursue my passion.” As he sported the helmet for the first time, other handlers asked him about it. If interest remains at this level, it’s possible Silva’s safety gear is going to be a trendsetter. His feeling about safety may also influence children since he teaches handling to young riders including Dressage4Kids. 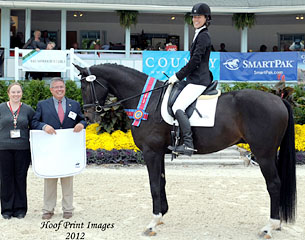 Christine Smith, another handler and long time Dressage at Devon veteran, took home both the Draper Therapies and the John Perry handler awards. Smith’s path to becoming a handler started when she was given a mare that was not sound. She bred her and in 1995 started showing her foals at Dressage at Devon. When she showed them in hand, she noticed there were people bringing one horse after another into the ring to show them. She guessed they could not own every horse they handled, asked a few questions, and discovered that handling was a paid job.

Ever since, she’s been offering her services as a handler. “I love handling because I feel the horses’ power. I’m so close to their big movement. It’s like riding from the ground.” Over time she says the horses have taught her how to be a good handler. She’s learned where to touch them to show them at their best — something that varies with every horse. After all these years she’s still passionate. “People hand me these beautiful horses, let me go into the ring and do what I love, and when I deliver the horse back, they hand me money,” she smiles.

Day 3 will feature a combination of breed and performance classes. The day will start with judging of 20 unique breeds including Oldenburgs, Andulusians, Knabstruppers, Gypsy Vanners, Halfingers and many more. FEI and USEF Fourth level tests will round out the day and offer a great introduction to the performances on Friday, Saturday and Sunday.