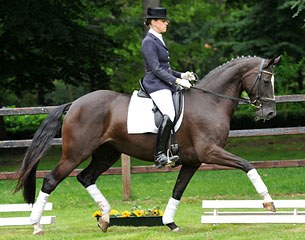 The already well trained mare by De Niro x Canaster I x  Caprimond sold for 167,000 euro to Canada and will be trained at Christilot Boylen's barn in Germany. The mare's original name is "Weideglück" and she's a full sister to Duke of Oldenburg.

The second most expensive horse at the auction was the mare Donna Doria (by Danone I x Caprimond) which sold for 120,000 euro to Finland. 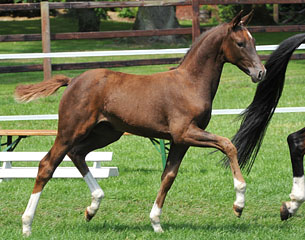 The most expensive foal at the auction was Fernet Menta (by Fidertanz x De Niro x Caprimond) which found a new home at Emma Jane Blundell's in Great Britain for 25,000 euro. The colt Didavi (by De Niro x Sandro Hit x Hohenstein) sold for 19,000 to a barn in Sachsen-Anhalt, while Finch Hatton (by Fidertanz x Le Primeur x Corradino) sold for 18,000 euro to Danish junior rider Anna Zibrandtsen. The same price was paid for the Oldenburg filly Duchesse (by Duke of Oldenburg x Fürst Heinrich x Donaumonarch) which moves to South Germany.