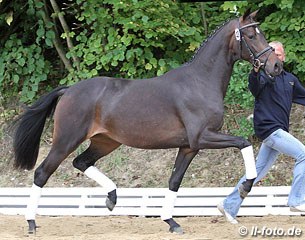 Clinton Star is by Clinton II x Kannan and sold for 250,000 euro. The riding horses up for auction were practically all show jumpers, but the rest of the top prices were in fact achieved by the dressage horses. 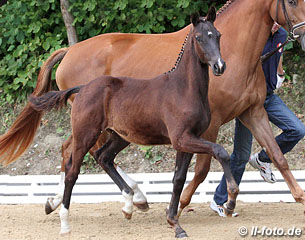 The 2-year old mare Best of All (by Bordeaux x Sir Donnerhall x Don Schufro) sold for 100,000 to British Emma Jane Blundell. The mare is out of the same dam as 2009 born ET products For Romance (Oldenburg Licensing Champion) and Fasine (2012 Oldenburg Elite Mare Champion). Best of All is one of the many ET foals dam Gesina has produced so far.

The most expensive foal sold at this auction was Tout Noir, a liver chestnut Totilas x Florencio colt. It sold for 60,000 euro.