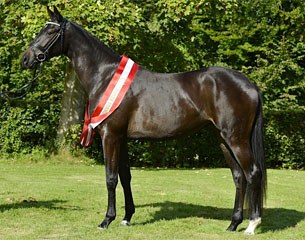 As best 2-year-old jumping filly the judges appointed the highly functional grey Hip-Hop's Cichita (by Ci Ci Senjor Ask). She was described as a feminine, long-legged filly with a super supple topline and very efficient canter. In free-jumping the filly showed convincing and effortless jumping for which she scored 8 in technique and 9 in capacity.

In the dressage section two fillies stood out in a league of their own. The champion title was awarded the beautiful Stigma, which is bred in Sweden and owned by a Norwegian. This black-brown filly was already familiar with laps of honour at Vilhelmsborg, as she was actually the dressage filly foal of the year in 2010. The judges praised this filly as a feminine and noble filly of excellent type. H scored 9 for walk, trot and canter as well as overall impression.

Stigma is the full sister to the Oldenburg licensing revellation Tomahawk, which sold for 800,000 euro at the Oldenburg Stallion Auction in November 2011. Both Stigma and Tomahawk are bred by Swedish veterinarian Lena Nystrom.