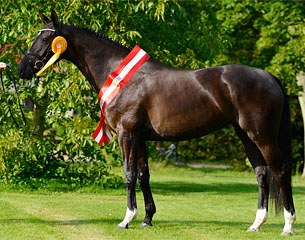 The best jumping mare of the year, Cordia bred by Tage Petersen from Bylderup-Bov, represents one of the very strong Danish dam lines. Her dam Coronet was a gold medal mare herself. The judges described Cordia as a functional and harmonious mare with a very supple topline. She jumps powerfully and with enormous capacity.

The best dressage mare of the year, Tirana from Poul Hove & Gitte Søgaard in Snedsted, was also mare of the year as a two-year-old. This mare is also out of a strong dam line is and out of the gold medal mare Crelita. The judges praised Tirana as a mare of excellent type. She radiates international capacity and moves with great activity and a constant uphill tendency. Tirana earned 10’s for type, topline and overall score.

In addition to the two champion mares another three mares were selected for the final gold ring. The five gold medal mares are: