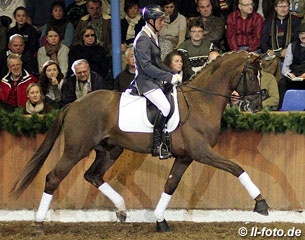 The sport rights to the Mecklenburger licensing champion Don Frederic (by Don Frederico x Wolkentanz I x Liberty M) have been sold to Ann Kathrin Linsenhoff. The 3-year old chestnut stallion is owned by Paul Schockemöhle.

Bred by Beate Wedermann, the Hanoverian branded Don Frederic became the Mecklenburger licensing champion in November 2011. The stallion was also approved for the Hanoverian society at the under saddle licensing in April 2012. He made quite an impression under saddle at the Schockemohle stallion shows in February, showing off his powerful movements despite a strong contact in the mouth.

The sport rights to the stallion have now been sold to Linsenhoff, who will give the ride on the horse to her stepson Matthias Rath. This news was confirmed to Eurodressage by Christoph Hinkel, a Schockemohle stud manager. "Paul Schockemohle and  Ann-Kathrin Linsenhoff have found a similiar agreement as with Totilas," Hinkel told Eurodressage. "This combination suits very well."

Linsenhoff and Schockemohle have similar sports arrangements for stallions Totilas and Bretton Woods. Schockemohle's Furst Romancier is also in training with Rath.