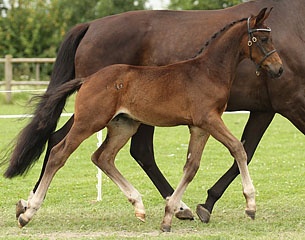 The Jazz x Stedinger x Lord Sinclair colt sold for 160,000 Danish kroner (21,477 euro) to a trio of buyers: Ib Kirk, Krabbe and Per Skjaerbaek. The bay colt is out of silver medal mare Atterupgaards Minelli, whose full sister Minaia is a gold medal mare and dam to licensed stallion Sastre.

The third best selling foal was a filly by Romanov x De Niro x Lancer. The dam of this filly is the full sister to licensed stallion Dancier. Blue Hors acquired the foal for 100,000 DKK (13,421 euro).

The Danish warmblood society was pleased with the sales results of this auction. 85% of the foals sold to new owners and the average price for a foal was 57,500 DKK (7,718 euro).