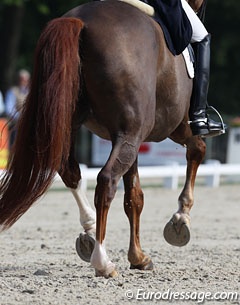 Dr Uta König von Borstel, Roxane Hoogveld and Matthias Gauly of the Department of Animal Science at the University of Goettingen conducted research in the differences in hind limb angulations between top-level dressage and show-jumping horses.

The aim of their study was to compare angles of the rear extremities of top-level dressage horses (n=40) with top-level show jumpers (n=40) horses competing successfully at German level L (roughly comparable to “elementary” in the Anglo-Saxon system) to international level 5* (highest competition level). Horses were balanced for competition levels across disciplines with a focus on horses competing at international levels.

According to previously validated procedures, pictures were taken while the horse was standing without a mounted rider on even ground with its weight distributed on all four legs. Marks were placed on the horses’ tuber sacrale, ischial tuber, stifle and tarsus in analogy to the anatomical landmarks used in practice to evaluate equine conformation. Based on these marks, hip- and knee angles were calculated using the software package Golden Ratio.

Within discipline, hip and knee angle did not correlate significantly with each other (both p>0.05). Mixed model analysis revealed no differences between dressage (56.1±0.6°) and show-jumping (56.0±0.6°) horses for the hip angle (F-test: p>0.05). However the angle tended to be more obtuse for horses competing successfully at more advanced rather than lower levels, regardless of discipline (+0.5±0.3° per additional level; F-test: p>0.05). In contrast, dressage horses had a more acute knee angle (90.3±1.0°) compared to show-jumping horses (93.4±1.0°; p>0.05), but this angle did not change significantly with higher competition levels (p>0.05).

Overall, differences between dressage and show-jumping horses or between horses of different levels were small, and from the present result it is not clear if differences are innate or the result of training. Additional information such as angles to the ground should be collected to get more complete information on the interrelation between different factors.

Compared to top level dressage horses, show jumping horses appear to have slightly more upright legs based on the stifle, but not the hip angle. These differences might be used as additional information when selecting young horses for sport.