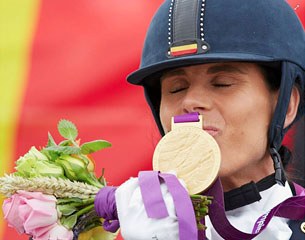 It was huge day of sport, with 39 combinations competing for individual honours as well as team points in Grades IV, III and Ia, three Individual Championship medal ceremonies, three new champions, and last but certainly not least the overall Team score.

The day got off to a spectacular start for all Belgians with Michele George and Rainman claiming their first gold medal at London 2012, both Olympic and Paralympic and across all sports. Their achievement also goes down in the history books as the first equestrian gold medal for Belgium at a Paralympic Games since Para-Equestrian joined the programme in 1996. Next came a stand-out performance from Germany’s Hannelore Brenner and Women of the World to retain their 2008 Paralympic title whilst in Grade Ia, Sophie Christiansen did the home crowd proud with another brilliant test that was verging on perfection.

Meanwhile, as the day progressed, the team scores began to take shape… It was clear that Great Britain was on the road to gold and that unless things went terribly wrong, Germany was assured a silver. However bronze was up for grabs with the Danes, the Dutch, Belgium and Ireland within inches of the podium. It was literally in the closing stages when Helen Kearney and Mister Cool, third last to go in Grade Ia, produced a brilliant test to earn a score of 76.700 taking not only individual silver but putting Ireland in third place on 428.313 with just over half a point on The Netherlands’ score of 428.253.

Michele George from Belgium came to London with the hope of turning her two previous silver Championship medals (European in 2009 and World in 2010) into gold and she did with a brilliant performance riding Rainman and a personal best for the Individual Championship test on a score of 77.065. “The ride was genius, it was like a puzzle, all the pieces fit together” said the  38 year-old horse trainer. 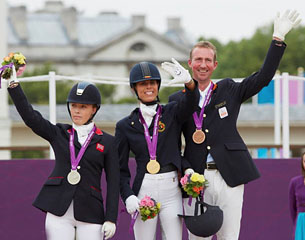 Her biggest rivals and World and European title-holders in Grade IV, Sophie Wells and Pinocchio, had to settle for silver this time around, a hard reality to face at a home event but Wells knew that any errors would put her gold medal hopes in peril up against such fierce competition. “I followed Michele and heard her score outside the arena. I knew that it would have been possible (to win) as long as I didn’t have any mistakes, but the mistake was there. You can’t change it. The standard is so high, but I’ll rectify my test for Tuesday” said the 22 year-old.

Third place in Grade IV went to Frank Hosmar from the Netherlands who was absolutely delighted with his performance and that of his relatively inexperienced horse Alphaville. It was only in July that they decided the 7yr old Alphaville would be coming to London instead of his experienced mount Tїesto. “Alphaville’s  a gentle soul and always willing to work. I am really pleased with the performance we did today and our bronze medal” he said after the prize giving ceremony.

Hannelore Brenner holds on to her Paralympic title in Grade III

Lots of seasoned riders and horses in Grade III but Hannelore Brenner and Women of the World – defending Paralympic champions – convincingly took the top spot ahead of Great Britain’s Deborah Criddle, 2004 Paralympic gold medallist and Annika Dalskov, also a former Paralmypic, World and European medallist, from Denmark in third place.

It wasn’t all smooth sailing for Hannelore Brenner (GER) and Women of the World as the nerves, pressure and concentration got the better of her in the arena leading to a mistake in the routine and a 2 point deduction from each of the judges. However, once she was back on course, Women of the World stayed right with her throughout and all the way to gold. “This is the most amazing medal I have ever won, Women of the World just gets better and better every day and is she is just wonderful” said Brenner of her 17 year-old mare that also took her to gold in 2008.

For Deborah Criddle, first in the draw, it was a lengthy wait but given the years of experience, composure was not an issue as she explained later: “Yes I’ve been there, done that, you learn to live with things. There’s always another day but not, unfortunately, another London 2012. But you just have to deal with that. Yes, there was a mistake. I had too much bend and couldn’t contain what I’d created, so we had an abrupt stop. He’s a sensitive chappie and there was more atmosphere today, but he grew into it in a good way. We had a lot of super movements, and overall it felt fantastic.”

Last on the day’s busy agenda, Grade Ia individual Championship Test – the last of the five Grades to go, revealing both the Grade Ia medallists and also providing the last scores for the Team tally. 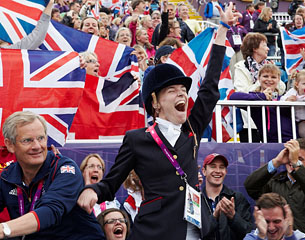 Given the impeccable Team test on Friday by Sophie Christiansen and Janeiro 6 there was little doubt in anyone’s mind that the World, European and Paralympic champion could be beaten today. First to go, Christiansen then waited for two hours as the remaining 13 competitors attempted to close the gap, but it was to no avail and she comfortably won her Grade on a final score of 82.750, just a few marks below her record team test score two days ago. “I went in trying to think this was just a normal training session, but there happened to be 10,000 people watching” commented Christiansen.

Helen Kearney, the one to watch following a strong Team test and third last to go in today’s Grade Ia Individual Championships Test, produced a magnificent test on former Eventing horse, Mister Cool, to clinch silver and push the Irish team into bronze medal position with just over half point on The Netherlands. That makes two medals in one day for a nation that had never sent a team to the equestrian events of the Paralympic Games - just individuals – and had never won a medal before!
Third place went to Laurentia Tan, Singapore and Asia’s first and only Paralympic medallist in Equestrian sport to date – winning bronze in 2008, and again today. “I’m so excited, so happy. I couldn’t have asked for better. London is my second home and I just want to scream” she said.

Last in the arena today, Rihards Snikus, the first Latvian to compete in equestrian sport at the Olympic and Paralympic Games, was over the moon with his first individual Paralympic mark, taking fourth place just shy of a medal in Grade Ia.

Ireland won their first two medals at the equestrian events of the Paralympic Games – individual silver for Helen Kearney and team bronze.

This was the first time Ireland ever sent a team to the equestrian events of the Paralympic Games.

Rihards Snikus is the first Latvian to compete in equestrian sport at Paralympic or even Olympic level.

Great Britain won the team gold medal on a record score of 468.817.

Great Britain has five members on the team, and so far has won 3 gold and 3 silver medals.

Grades II and Ib will have their Freestyle tests on Monday, followed by Grades IV, III and Ia on Tuesday

Related Links
First-time Lucky: Paralympic Debutants Take Grades II and Ib
Day Two for the Team Tests and Great Britain on the Road to Gold
Team Tests for Grades II and Ib Set the Pace for the Week Ahead
Eurodressage Coverage of the 2012 Olympic Games