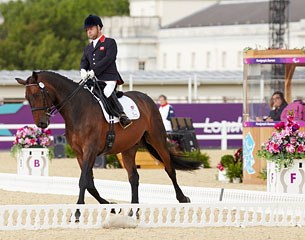 The Equestrian events of the London 2012 Paralympic Games got off to a partly wet and windy start for Grades II and Ib in the team test today, but little could dampen the spirits of the riders and their teams as they began their Paralympic journey. There was a genuine buzz about Greenwich Park and British riders did not disappoint the enthusiastic crowds as they battled with the elements, taking pole position in both Grades.

The spectators, many for whom this would be a first Dressage experience, were sensitive to the needs of the athletes in terms of cheering and congratulated them when they saw it was safe to do so. For many of the riders, this was probably the first time they and their horses have ever competed in front of such large crowds so it truly marked the beginning of what is likely to be a unique experience.

In the name of the Team

The first two days of competition are all about the team with riders in each Grade competing in the Team test. However, as there are some riders competing here as individuals (a team is composed of a minimum of three and maximum of four individuals), they also take part in the team test but their scores do not go towards any final marks, making it a practice run of sorts.

Natasha Baker performed a magnificent test riding Cabral to take the top spot in Grade II but as she is not in the British team - they qualified 5 riders so a team and one individual – her score does not count but she will definitely be one to watch in the individual medals especially given her comfortable lead on Germany’s Britta Napel in second place. Britta Napel won Individual Championship gold in 2008 as well as team silver, so it’s a promising result for the German team and places her amongst the favourites for the individual medals. Third place in the Grade II team test went to Lauren Barwick, reining Paralympic Freestyle champion, providing Canada with some valuable points and a good test run before the Individual Championship test gets underway.

Demonstrating the true champion that he is, Lee Pearson and the wonderful Gentleman took pole position in the Grade Ib team test in the pouring rain this afternoon, giving Great Britain its first team points. If according to Pearson “it’s an OK start” then he very well may go on to become the most successful British Paralympian (across all sports) of all time. He currently has nine, so this would entail winning the three available to him (Individual Championship, Freestyle and Team). However, there is some sturdy competition in Grade Ib, with Pepo Puch (former international Event rider) from Austria close on his heels, coming in second place today. Third on the Grade Ib Team test scoreboard is Joann Formosa riding Worldwide PB, a fairly new rider to the international scene and representing Australia for the first time at a major event.

Rosie, the mount of Katja Karjalainen of Finland and Ballantine, the partner of Norway's Anne Cecilie Ore, were the only two out of 77 horses originally inspected yesterday to be referred to the holding box to be re-inspected early this morning, and they both passed with flying colours.
Failing to pass the second re-inspection could have resulted in the riders not being permitted to participate, which for Norway – bronze medallists in 2008 -  would have shattered their hopes of any team medals as they would have been reduced to just two riders.
Karjalainen rode Rosie in the grade Ib Team Test competition this afternoon and came a very respectable fourth, so crisis averted and she can now look forward to competing in the individual Championship test on Saturday 1 August.
Ore will be riding Ballantine in the grade III Team test tomorrow.

What to expect tomorrow

Grades Ia, III and IV will have their Team tests tomorrow which will give a provisional team score made up of the best three scores per country prior to the Individual Championship test – where the best three team scores are also added to make the final mark. Start lists can be found here

Complete Results can be found here

Quotes
Barbara Minneci (BEL) Grade II “It’s super. The organisation is brilliant. Everyone is here to help us so all we have to worry about is the competition.”

Lauren Barwick (CAN) Grade II “My mare did the best she could. It’s an amazing environment and I’m very pleased. It’s very different at this Paralympics because the crowd makes a huge difference, but I’m very pleased with today.”

Lee Pearson (GBR) Grade Ib “He warmed up fine but when we went into the ring he heard the crowds cheering and said ‘Oh do we really have to work today?’  He was cheeky and in child mode – it was a bit like being in  a car race without an accelerator."

Angelika Trabert (GER) Grade II “Each one (Paralympic Games) is special, you can never compare them. I will never get tired of it – I just want to go on and on. It’s one big equestrian family full of friends.”

Natasha Baker (GBR) Grade II “This is my first Paralympics and my first outing. The crowd were really great. I felt good yesterday but this morning the nerves really set in and all I wanted was to get it over and done with. Now I want to get back in the ring and do it all over again.”

Rebecca Hart (USA) Grade II “It’s his first international arena and we handled the rain very well. I think the rain put us into a bubble together and we used it as an aid.”