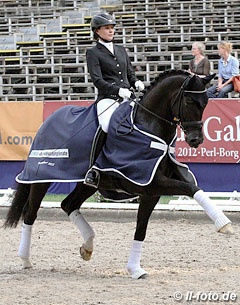 German Olympic team silver medallist Kristina Sprehe rolled from one major championship into another, winning yesterday's opening class, the 6-year old preliminary test, aboard her young star Furst Fugger at the 2012 Bundeschampionate in Warendorf, Germany. Sprehe and the black Oldenburg stallion won the test with an 8.7.

The silhouette of the black stallion by Furst Heinrich x Weltmeyer is very similar to that of her Grand Prix horse Desperados. The black stallion has tons of elasticity and bounce, which translated in generous top scores for his gaits, but the youngster still has problems staying uphill in the frame and often dipped behind the vertical. His obedience and submission were wonderful though and the stallion executed smooth flying changes.

Ines Westendarp and Lone Boegh Henriksen and Paul Schockemohle's Oldenburg licensing champion Furstenball (by Furst Heinrich x Donnerhall) obtained the fourth highest score of 8.3. The elastic bay stallion moved uphill in both trot and canter and had massive ground cover in the extended walk, but struggled to stay consistent in the poll and the flying changes lacked expression. They got 8.3. Victoria Michalke and her promising bay mare Novia (by Stedinger x Alabaster) tied with Furstenball on 8.3. The Bavarian bred mare stands out with her bounce and cadence in trot.

Ralf Kornprobst and the elegant chestnut mare Devina (by Dacaprio x Akzent II) earned 8.2. The Baden Wurttemberg mare is a star for the future with FEI potential written all over her body.