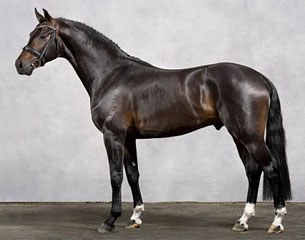 The mandatory offspring inspection of the Hanoverian branded and Westfalian, Swedish, Belgian warmblood and KWPN licensed stallion Connaisseur (by Con Amore x Donnerhall) has been cancelled as the stallion will be exported to Canada.

The dark bay stallion was acquired by Pocock as a 2,5 year old after Ad Valk had purchased him in Germany. Connaisseur was leased to the Swedish National Stud at Flyinge as a three year old, where he became the fourth highest producing stallion in Sweden in 2010. The horse  returned to Holland and went in training with Emmelie Scholtens. The duo competed at the 2011 and 2012 Pavo Cup Finals in Ermelo, The Netherlands.

Pocock can not yet provide details about Connaisseur's departure nor his new career in Canada but has confirmed the stallion will be leaving Europe. "We have no date confirmed yet, but it will be soon," Sara told Eurodressage. "He will move to the West Coast where I am based. (There are) no concrete plans just yet, still trying to get everything sorted."

Charlotte Gunnink of the KWPN office commented that, "when a stallion gets exported and the owner doesn't want to show foals, the choice is his/hers. Because several inspectors have already reviewed some foals at home an conformation index will be published (on Connaisseur) in January 2013, so that breeders get an impression of how this stallion inherits."