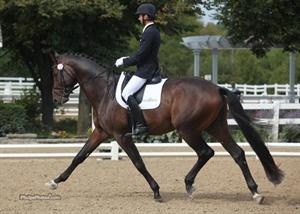 In the four-year-old division of the 2012 U.S. Young Dressage Horse Championship at Lamplight Equestrian Centre in Wayne, ILL, Michael Bradgell (Colora, MD) and Hemmingway (by Hofrat x  Archipel) scored a narrow win over to claim the National Title.

Theresa Schnell’s Oldenburg stallion was awarded 8.5, 8.0 and 8.0 for walk, trot and canter respectively. Hemmingway’s supreme gaits  were rewarded highly in addition to earning an 8.3 for submission and 8.5 on general impression. The pair earned an overall total of 8.26.

“I knew it was going to be hot so I didn’t do too much in the warm-up,” said Bragdell of his preparation. “I felt I had a few bobbles in Thursday’s Warm-Up [class] so I worked on those and had a nice fluid ride today. I kept telling myself to stay relaxed.”

Placing second was Christopher Hickey (Colora, MD) and Qredit Hilltop (by Quarterback x Dream of Glory). Hilltop Farm’s Oldenburg stallion earned high marks for his gaits including an 8.4 on the walk and 8.0 for his trot and canter. He also received 8.2 and 8.5 for submission and general impressions respectively. 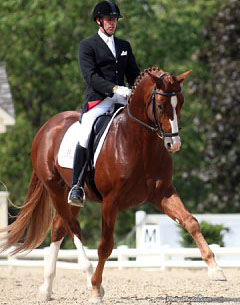 “Today was the best test Qredit has ever done,” said Hickey. “I knew I needed to bring up the submission scores. My goal was to have him be as steady as he could be in the contact.”

Both Champion and Reserve horses are trained and stand at Hilltop Farm in Maryland and Hickey believes the Markel/USEF National Young Horse Dressage Program is extremely important both in terms of breeding and development.

“This is an important step. As American breeders we want to keep supporting this program.”