The Rise of Equitation Science Recognized at 2012 ISES Conference 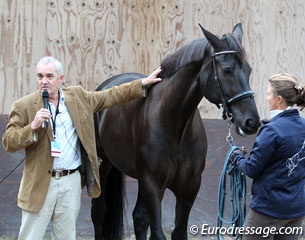 Equitation Science is a relatively young field. The profile of Equitation Science has been raised significantly during the last decade due to an emphasis on measuring the objective, quantifiable aspects of horse-human interactions.

For example, we can use rein tension gauges to objectively measure how much tension is taking place between the bit and the rider’s hands during different riding exercises. This coupled with carefully monitoring the horse’s behaviour in response to different rein tensions begins to give us an understanding of which tensions are perceived more or less positively by the horse. We might further add to the rigor of this type of experiment by also measuring heart rates and, perhaps, cortisol levels.

Just because we can utilize quantifiable measurements that are repeatable by other scientists, does this automatically benefit the horse’s welfare? Does it automatically answer our initial question? For example, what of horses that have already become habituated to high levels of rein tension over many years of being ridden in that manner. They may show no significantly aversive behaviours as compared to a horse ridden with a lighter hand, they may show no significantly different cortisol levels or heart rates as compared to the more lightly ridden horse. Does that give us an automatic “green light” to proceed with relatively high tension riding? In my mind, it does not.

Horses are a highly adaptable species. If we stall them individually for 23 1/2 hours per day in a solid walled box stall, exercise them for 1/2 h/day in an indoor arena, yet they show no evidence of ulcers, loss of bone density, nor stereotypic behaviour, does this make it an acceptable housing method? If we survey a warm up arena, and note the 10 most harshly handled horses in the arena (from our human perspective), yet, upon measurement, they show no measurable differences from 10 control horses, what does this tell us?

The benefits of science and its application to the field of equitation science surely outweigh its limitations, but we must always remember to keep our eyes open, watch the whole horse, listen to the whole horse and sometimes remember to trust our horsemanship instincts that brought us to this field to start with.

Does your training stand the test of science? The following 8 principles were originally defined in the peer-reviewed scientific literature (McGreevy and McLean, 2007). The application of these principles is not restricted to any single method of horse-training, and we do not
expect that just one system will emerge. There are many possible systems of optimal horse-training that adhere to all of these principles.

1. Understand and use learning theory appropriately. Learning theory explains positive and negative reinforcement and how they work in establishing habitual responses to light, clear signals. (Note that “positive” and “negative” when applied to reinforcement are not value judgements, as in “good” or “bad”, but arithmetical descriptions of whether the behaviour is reinforced by having something added or something taken away, e.g., pressure. For example, when the horse responds to a turn signal and the rein pressure is immediately released, negative reinforcement has been applied.)    It is critical in the training context that the horse’s responses are correctly reinforced and that the animal is not subjected to continuous or relentless pressure. Prompt and correct reinforcement makes it more likely that the horse will respond in the same way in future. Learning theory explains how classical conditioning and habituation can be correctly used in horse-training.

2. To avoid confusion, train signals that are easy to discriminate There are many responses required in horse-training systems but only a limited number of areas on the horse’s body to which unique signals can be delivered. From the horse’s viewpoint, overlapping signal sites can be very confusing, so it is essential that signals are applied consistently in areas that are as isolated and separate from one another as possible.

3. Train and shape responses one-at-a-time (again, to avoid confusion) It is a prerequisite for effective learning that responses are trained one- at-a-time. To do this, each response must be broken down into its smallest possible components and then put together in a process called “shaping”.

4. Train only one response per signal To avoid confusing the horse, it is essential that each signal elicits just one response. (However, there is no problem with a particular response being elicited by more than one signal.) Sometimes a response may be complex and consist of several trained elements. These should be shaped (or built up) progressively. For example, the “go forward” response is expected to include an immediate reaction to a light signal, a consistent rhythm as the animal moves in a straight line and with a particular head carriage. Each of these components should be added progressively within the whole learned response to a “go forward” signal.

5. For a habit to form effectively, a learned response must be an exact copy of the ones before. For clarity, a complete sequence of responses must be offered by the horse within a consistent structure (e.g., transitions should be made within a defined number of footfalls). Habit formation applies to transitions in which the number of footfalls must be the same for each transition and this must be learned.

6. Train persistence of responses (self-carriage) It is a fundamental characteristic of ethical training systems that, once each response is elicited, the animal should maintain the behaviour. The horse should not be subjected to continuing signals from leg (spur) or rein pressure.

7. Avoid and dissociate flight responses (because they resist extinction and trigger fear problems) When animals experience fear, all characteristics of the environment at the time (including any humans present) may become associated with
the fear. It is well-known that fear responses do not fade as other responses do and that fearful animals tend not to trial new learned responses. It is essential to avoid causing fear during training.

8. Benchmark relaxation (to ensure the absence of conflict) Relaxation during training must be a top priority, so when conflict behaviours are observed in the horse, we must carefully examine and modify our training methods so that these behaviours are minimised and ultimately avoided. To recognise the importance of calmness in enabling effective learning and ethical training, any restraining equipment, such as nosebands, should be loose enough to allow conflict behaviours to be recognised and dealt with as they emerge.